What are IT decision makers' preferences when it comes to content? We asked them. Discover the results here

Our latest research in the news A bottom-up and top-down look at intell... - Computer Weekly, 19 Apr 2021

Our latest research in the news Molson Coors incident shines a light on... - Food Dive, 30 Mar 2021

Our latest research in the news 61% of manufacturers have had a cyberse... - Manufacturing Global, 30 Mar 2021

On Saturday 23rd February, a team of researchers (and a few of our friends) took on the challenge of climbing Snowdon for the Marfan Trust and Royal Brompton and Harefield Hospitals Charity. We made it to the summit of the 1085-metre-high mountain and are so proud to have raised £1,480 (that’s 148% of our original target!) for these very special charities.

Before our climb, we promised that when we made it back down (and thankfully we all did!) we’d share some photographs of our expedition. The views were spectacular, and we were lucky enough to visit before the Beast from the East arrived, so the weather was in our favour.

Bleary eyed from an early start accompanied by a scramble to find the last few car parking spaces about a mile from the start, we gathered at the bottom of the Pyg track ready for our ascent. We had about seven-and-a-half miles of walking ahead of us, which we expected would take around six hours.

The sun was shining and we were all in high spirits - even Callum, who left his hiking boots at the Airbnb an hour's drive away. 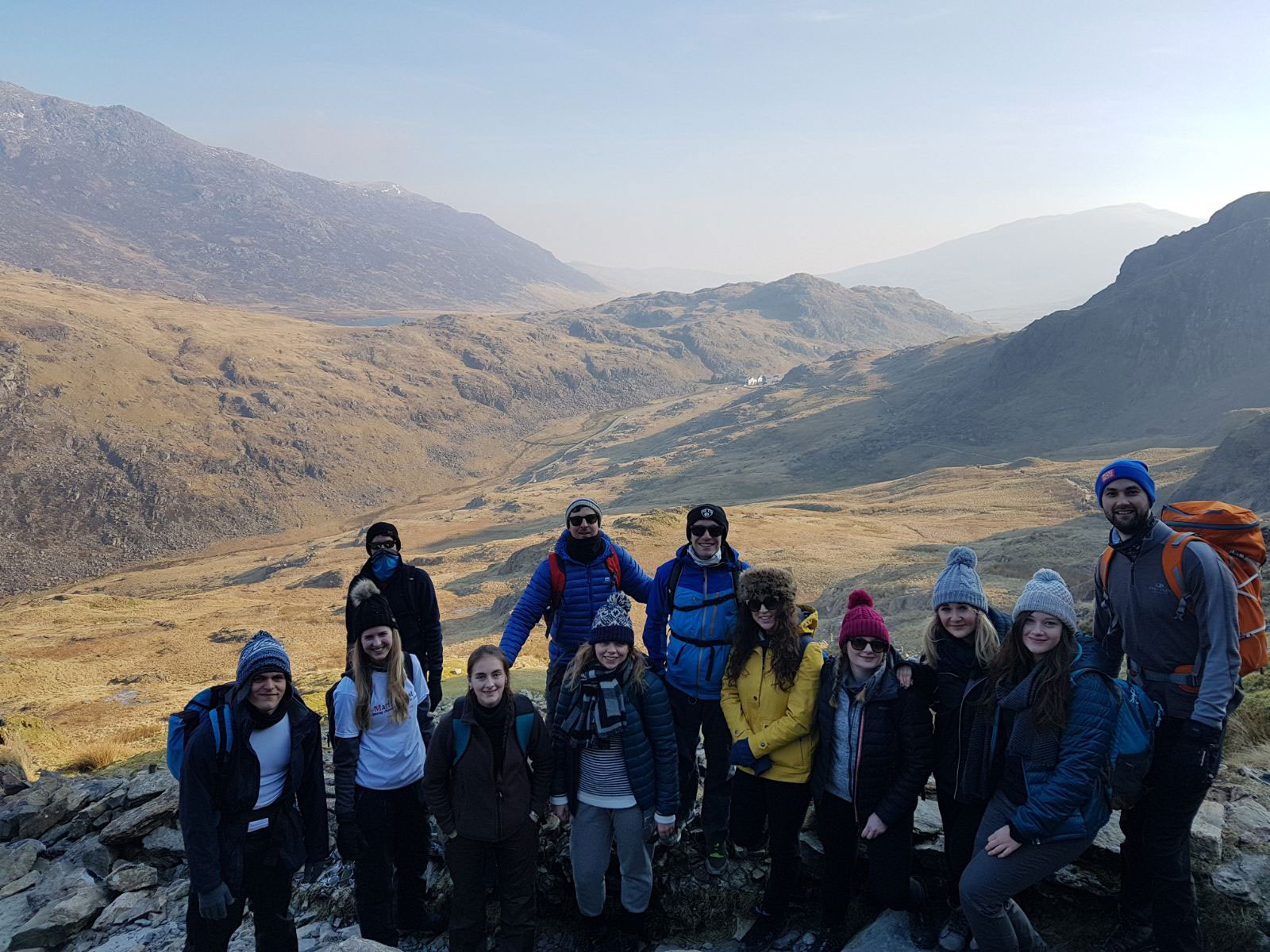 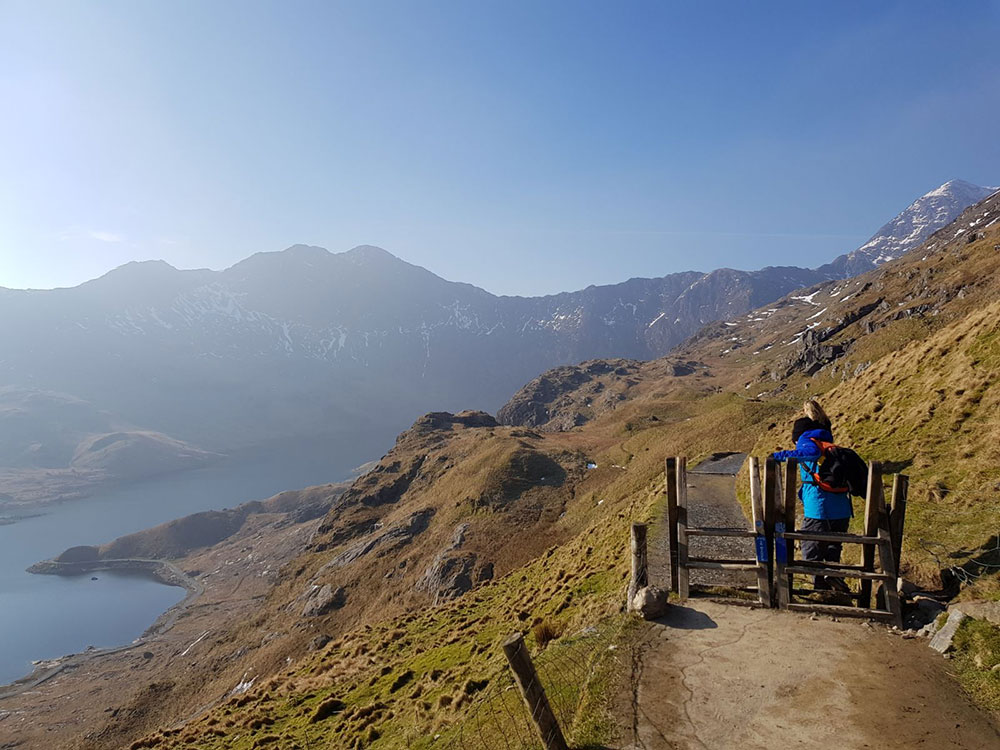 We stopped a few times to take in the views and eat some Jelly Babies or Werther's Originals (our versions of Kendal mint cake). 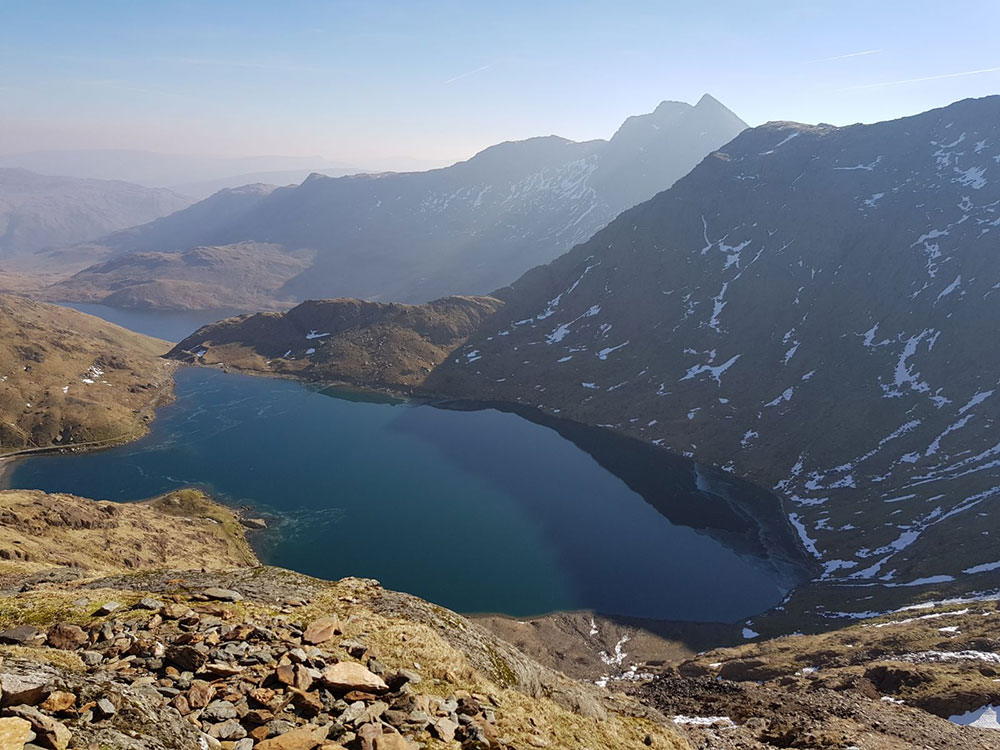 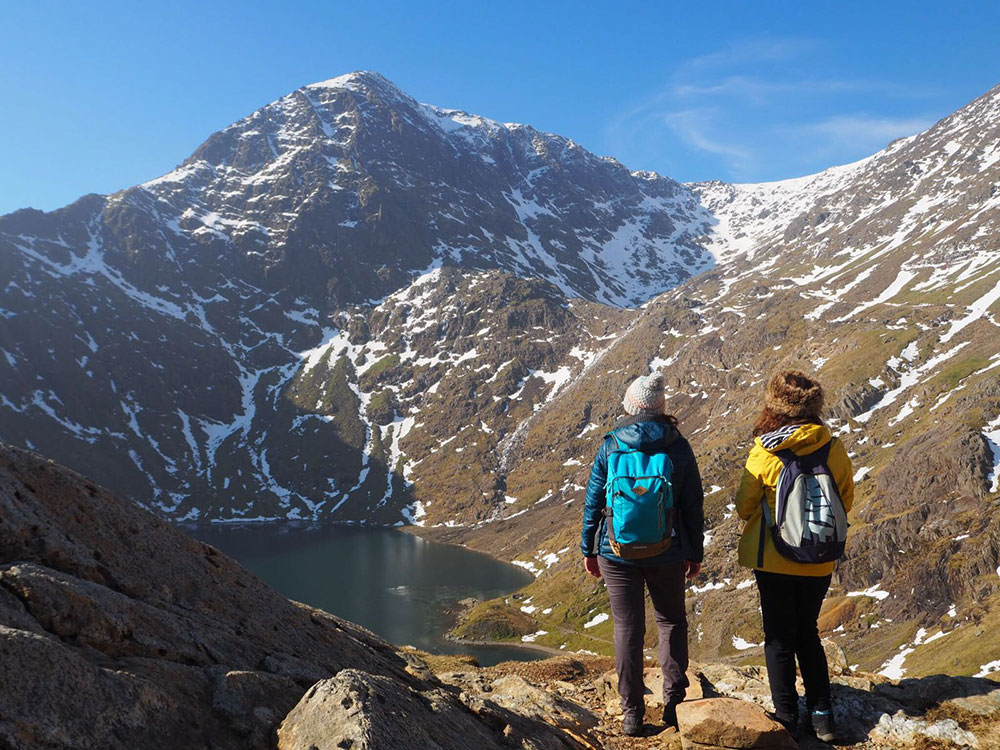 As we got closer to the summit, conditions started to deteriorate. We all gazed upon the snowy peak with a feeling of trepidation. We had to take on the zig-zag. Yes, that trecherous looking path below (taken from the safety of the summit). 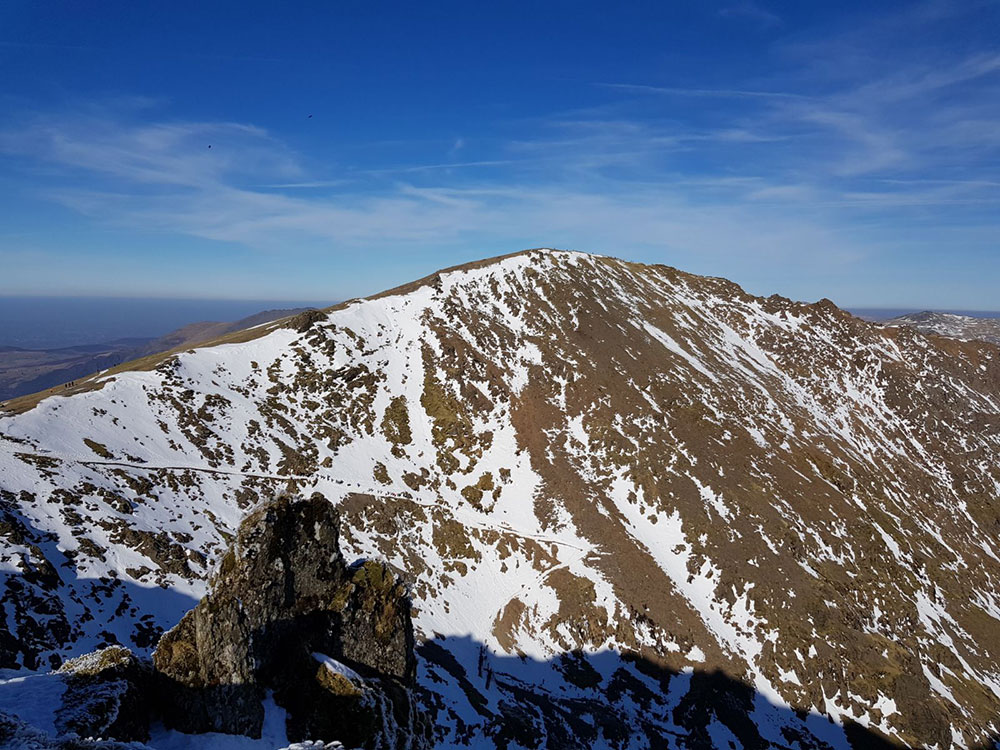 We'd prepared for winter conditions but didn't quite expect the last mile to be so extreme. 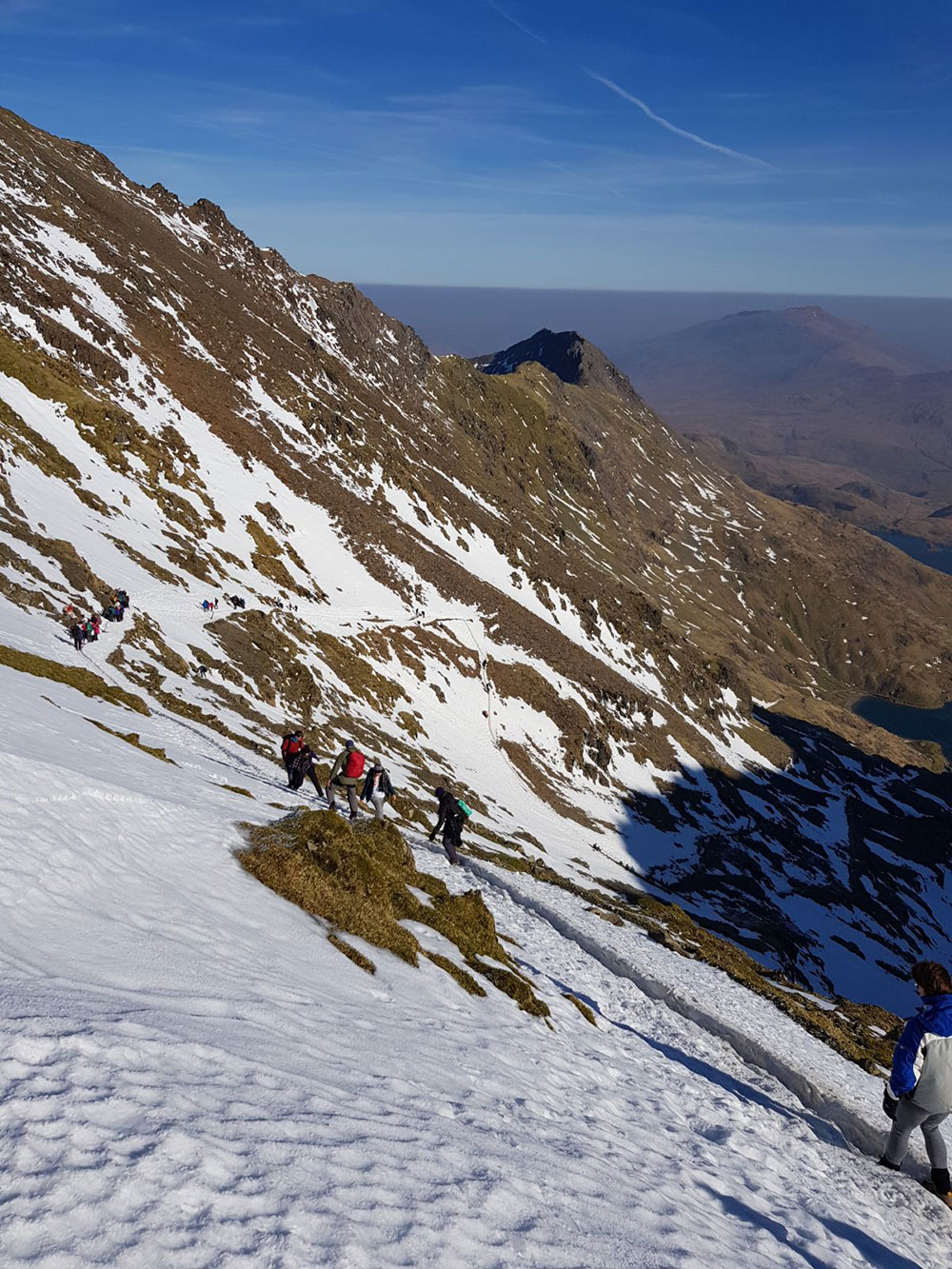 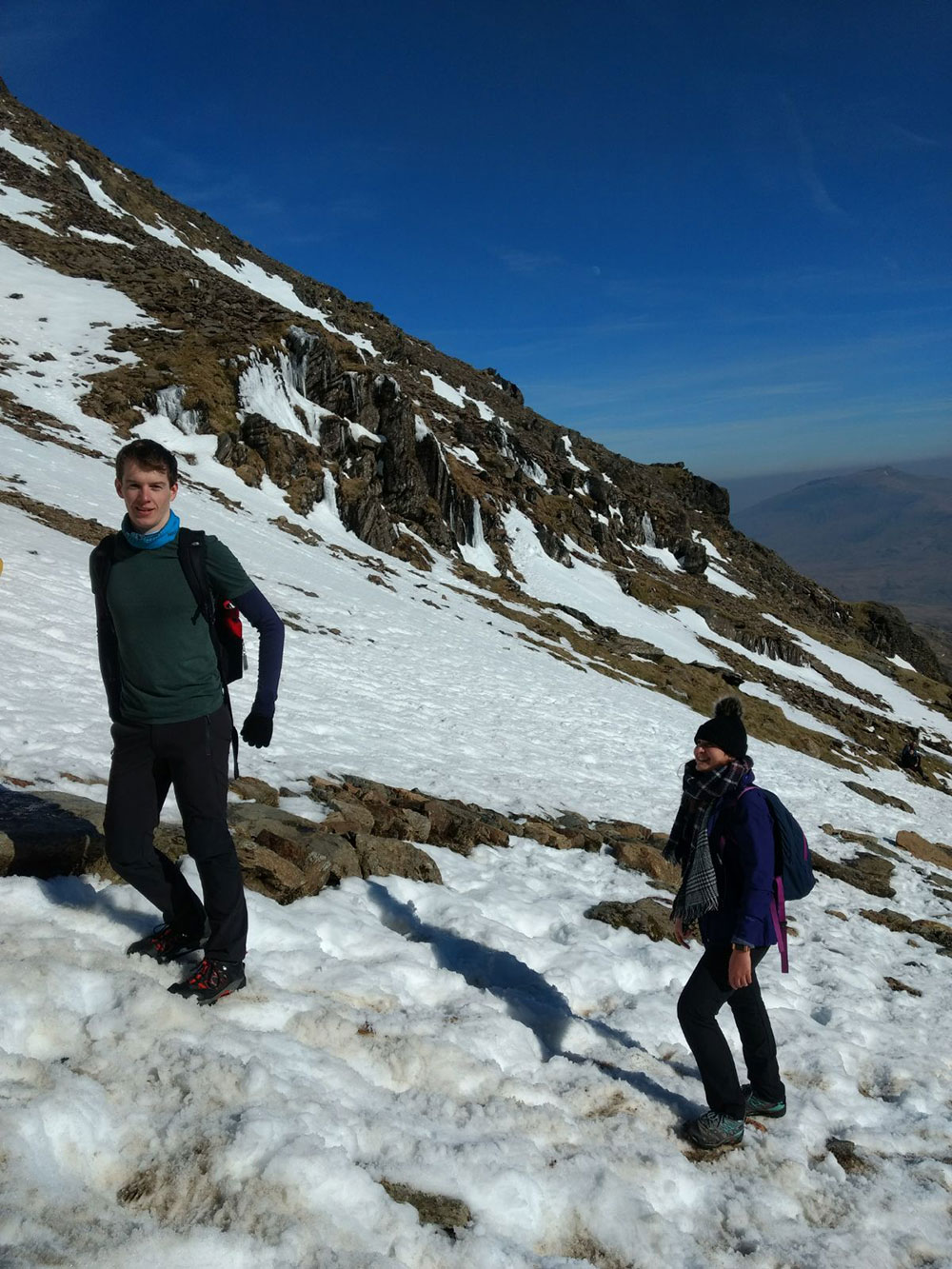 It was incredibly steep, but we braved the icy, single-track path, negotiating passing walkers making their descent. We were all nervous, and many of us lost our footing a few times, but we worked together as a true team - we fetched lost crampons, warned each other of especially slippery areas, and encouraged each other to keep on going - to get to the top.

And it was totally worth it. 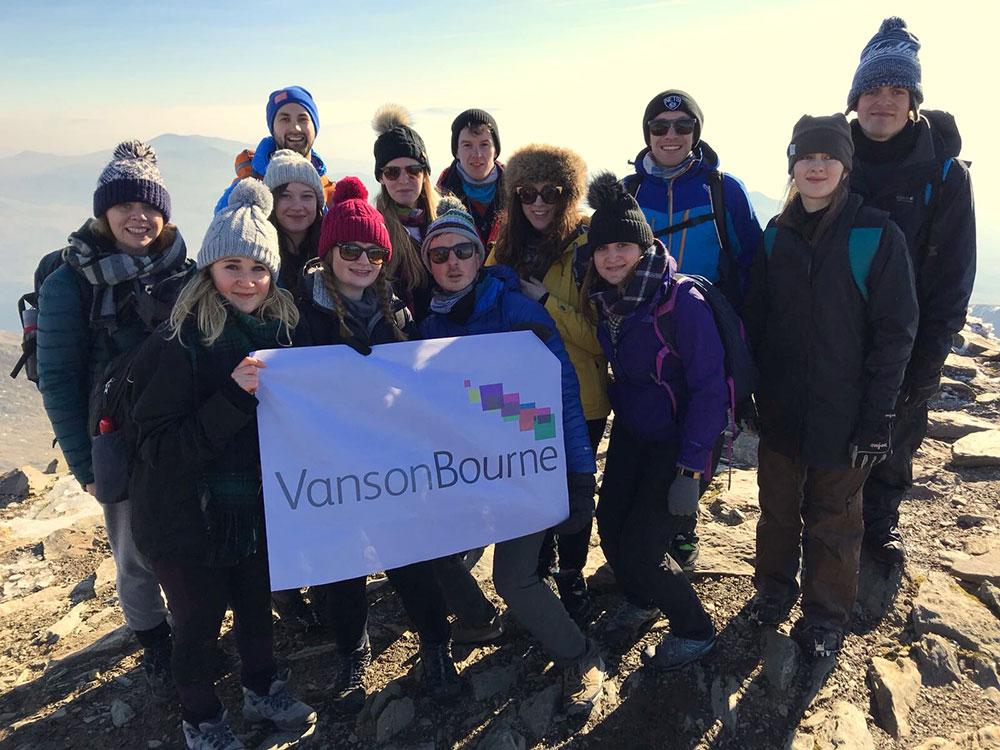 What goes up must come down, and we decided an unorthodox approach was the best option. Following the example of many walkers we met on the way, we had a little sit-down. The slides of Snowdon's zig zag were almost as fun as reaching the summit itself! 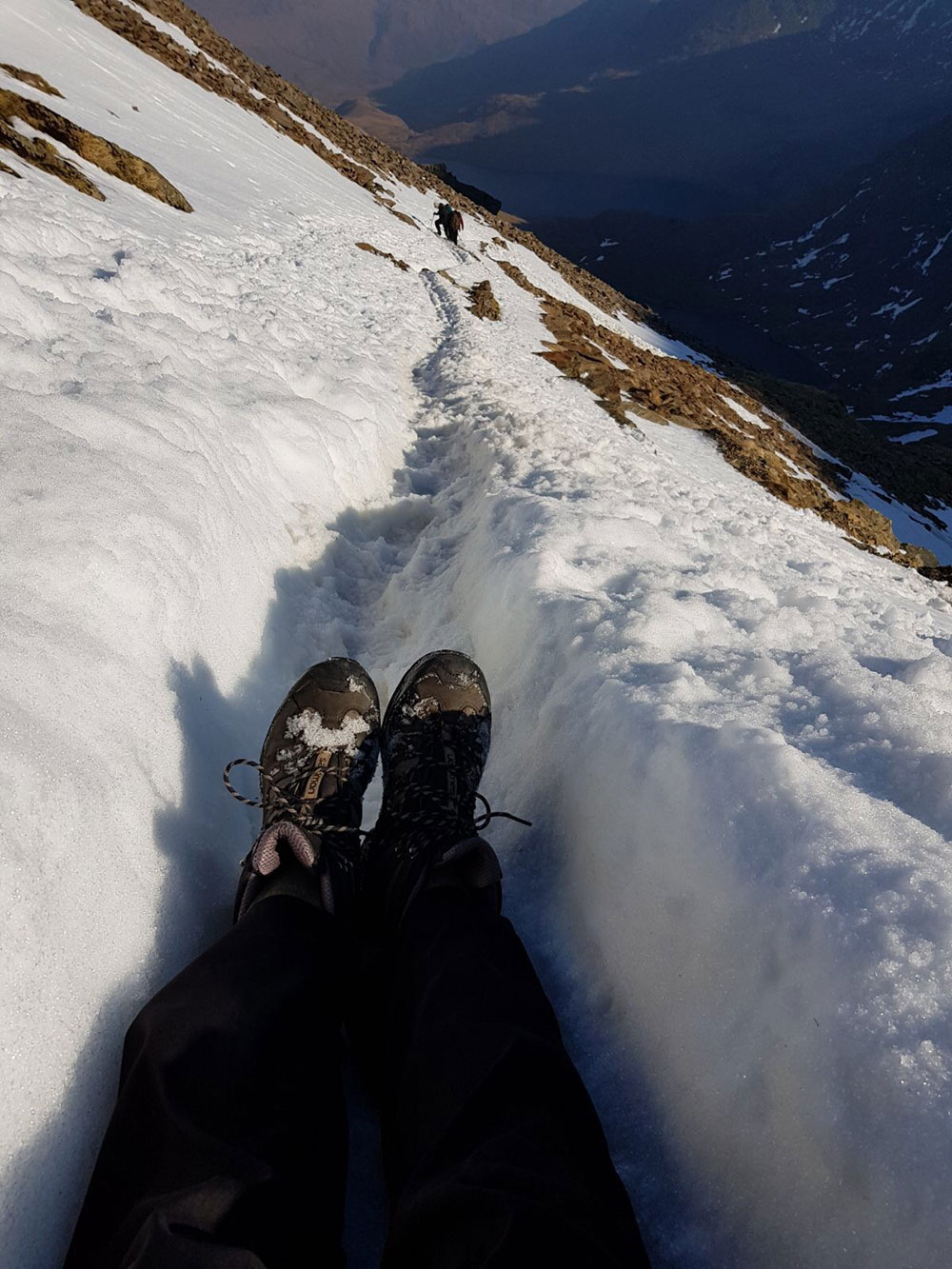 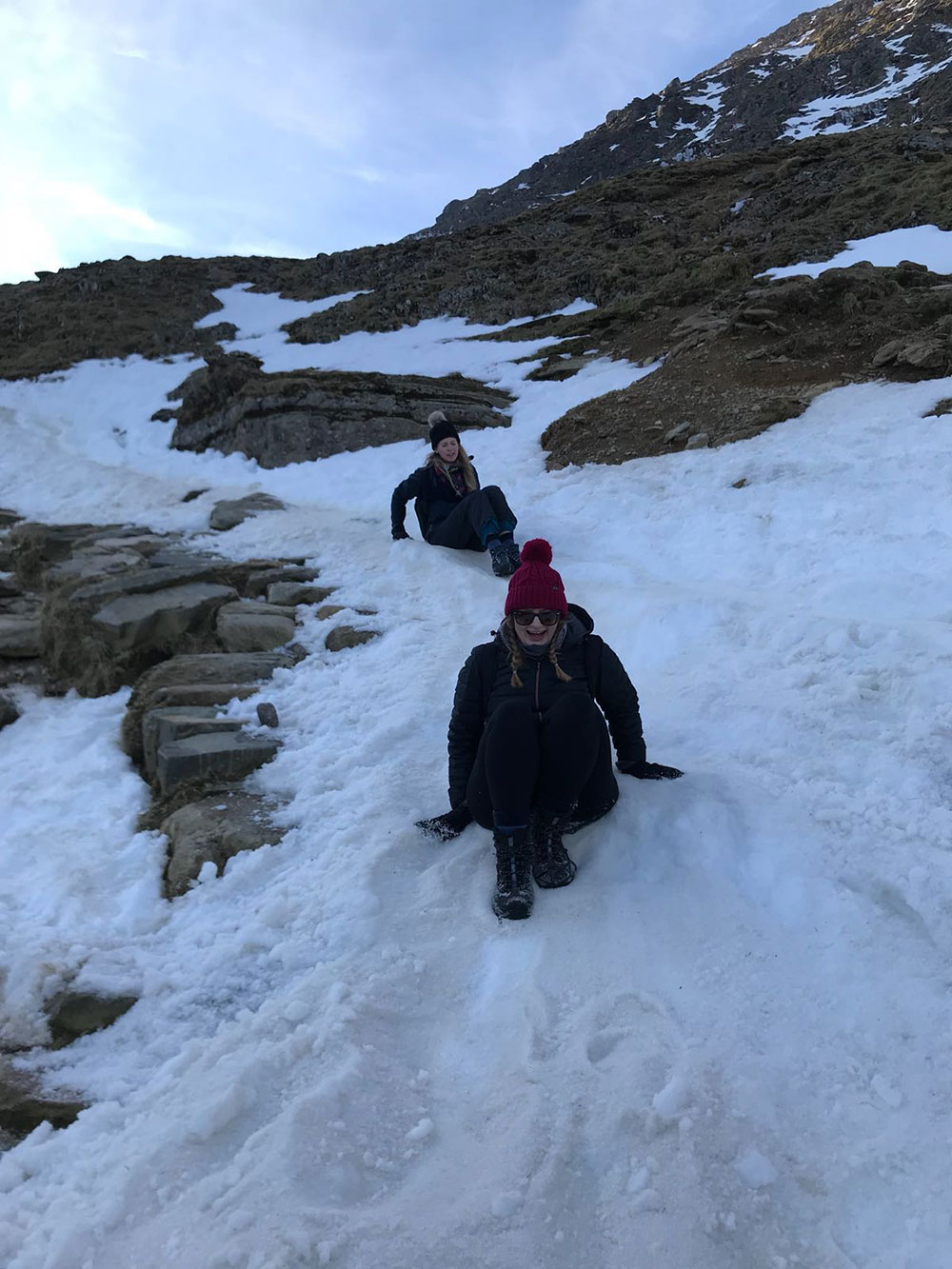 After eight hours of walking, having a few snowball fights, tucking into mountain snacks, and enjoying the beautiful views, we made it back. It was a great adventure!

We're over the moon at how much we have managed to raise, and are so very grateful to everyone that made a donation or wished us luck. Thank you for your support, and well done team VB!

In IT Together blog series: March

Beneath the surface of IT sourcing

In IT Together blog series: February

Is cloud security about to hit explosive growth?

In IT Together blog series: January

Discover the key elements to consider when conducting brand research and download our brief guide.

What the tech? Response to COVID. Episode 4: Strategizers

Fourth episode in a 4 part series where we take a closer look at those organisations within the Strategizing phase.

What the tech? Response to COVID. Episode 3: Formalisers

Third episode in a 4 part series where we take a closer look at those organisations within the Formalising phase.

What the tech? Response to COVID. Episode 2: Optimisers

Second episode in a 4-part series where we take a closer look at those organisations within the Optimising phase.

What do IT decision makers (ITDMs) think about the ever growing threats to cybersecurity and what needs to be done...

What the tech? Response to COVID. Episode 1: Adapters

First episode in a 4 part series where we take a closer look at those organisations within the Adapting phase.

What the tech? Filling the void

What has happened now that the doors are closed on technology conferences?

What the tech? Cybersecurity in response to COVID

Security and remote working: from uncertainty to optimism

Gung Ho meets Ho Hum: Why the US leads the UK in adopting new technologies.

What the tech? Response to COVID, animated video

How do technology vendors stay relevant as IT departments adapt to the challenges of COVID-19?

What the tech? TAKEOVER ebook

We're all in IT together.

What the tech? TAKEOVER results

Understanding the impacts of COVID-19 on ITDMs and their organisation

What the tech? Cybersecurity

The biggest threats in 2020

What the tech? The influence of events

Heading to an event this year? Find out how important they are to technology buyers

What the tech? The data universe

Today marks the start of our new brand identity. One that truly represents who we are as a company.

Our latest findings on security, compliance, IT purchasing, and more

Security risks over the summer, why questionnaire design is crucial, and our new data-only service

Getting inside the heads of IT buyers, tips on how many interviews you need to run research, and some big...

Research for product marketing, our tech marketing community, and some news about GPDR

A look at technology research topic areas, and top trends in 2019

A brand-new research service, a visit from marketing pros at Sophos, and an update on the many new campaigns created...

This month we've released insights about how enterprise IT is changing, seen almost a dozen client projects get press attention,...

We think this might be a record-breaking month. Ten new research projects published, a couple of appearances at client events,...

The coat stands are full and the days are drawing in. It’s definitely October.

Summer's over. Back to work, everyone. Read up on the 100+ headlines based on our research you might have missed...

Announcing the appointment of our new managing director, Neil Thorington

A week of webinars, four new team members, and a couple of quadruple layered cakes

Some more info about how we've changed how we deliver data, along with news about the Vanson Bourne team

A must-see video featuring Jimmy Mortimer, introducing a newbie to our research team, and absolutely nothing about cake, unfortunately

Our latest insights on digital transformation and IoT, climbing a mountain, and eating lots of pastry

A bit about how you can access our research for free, new starters and exciting promotions. Oh, and VB will...

2018 is just around the corner, but we're not counting down to Christmas just yet. There's still so much research...

It’s been a marathon month, quite literally. We’ve rowed two marathons, welcomed new starters, and are getting ready to release...

Three-quarters of the way through 2017 already, we’ve got our sights firmly set on finishing the year on a high....

A note about our colleague Hannah Dutton

A note about our colleague and friend Hannah Dutton

A look into how we're managing some substantial projects, some news on our panel of IT decision makers, and some...

A bit about professional development, the types of people we can interview, and our most recent case study